The System Worked As Well As Anyone Else's...Right? C'mon, really, Right?

My thinking 'til now was: This many years after 9/11, the foiled Christmas Air Terror Attack is just embarrassing. So much went wrong, in so many dimensions of national security, that everyone involved in national security should probably be more than just a wee bit humiliated.
Then I read this:

MOGADISHU, Somalia — A man tried to board a commercial airliner in Mogadishu last month carrying powdered chemicals, liquid and a syringe that could have caused an explosion in a case bearing chilling similarities to the terrorist plot to blow up a Detroit-bound airliner, officials told The Associated Press on Wednesday. The Somali man — whose name has not yet been released — was arrested by African Union peacekeeping troops before the Nov. 13 Daallo Airlines flight took off...

Okay, whoa. Time the fuck out. We ("we") miss this Umar Farouk Abdulmutallab guy. That's embarrassing. Then we find out that a month ago a UFA clone ran a rehearsal in Somalia and got caught by African Union peacekeeping troops. Now, I don't want to sound like an American chauvinist (I am, just don't want that perception to interfere with making my point), but we just got skunked by the African Union peacekeeping force. That's like the LA Lakers getting blown out by Brownie Troop 394.
Forget calling for "heads to roll." That doesn't happen anymore. Instead, we need to get cross-cultural and historical, and bring back a golden oldie as the official means by which someone that fucks up this bad expresses remorse for poor duty performance. Seppuku. 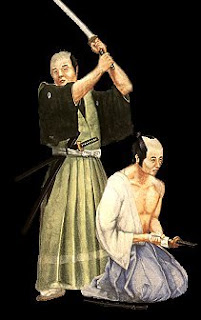